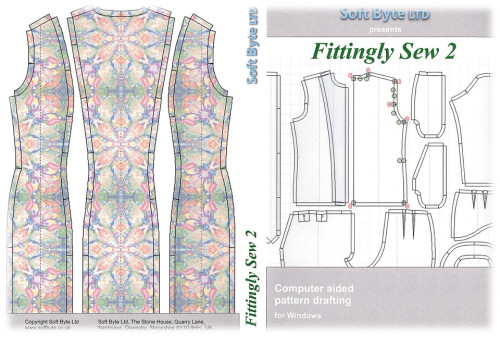 Fittingly Sew is primarily a program for people who want to draft their own patterns, and it has some very powerful tools to start you off, with a set of basic sloper patterns and templates which you can use as a starting point for your original creations.

You can also draft your own patterns starting from rectangular blocks, just as you would with pencil, paper and ruler. The on-screen editing and the use of the Clipboard makes the construction process accurate and simple to do.

Unlike most pattern making software of its price range, Fittingly Sew's emphasis is on freedom to design rather than on ready made garments. The built-in pattern and body blocks in Fittingly Sew are all women's, but you can adapt any of them to use for men's or children's clothes, or even for dolls.

New in version 2 is the ability to trace pattern pieces from background images, which may be photos of existing garments, scans of patterns from other sources, or even screen captures of other pattern design software.

People who find that ready made patterns don't fit well are able to enjoy comfortable well fitting clothes because of the way that Fittingly Sew can develop patterns based on virtually any body shape. We’ve had great feedback from customers who had been unable to get properly fitting patterns from other sources. The extensive set of body measurements used by Fittingly Sew and the easy to follow measurement diagrams ensure that even unusual body shapes are catered for.

Fittingly Sew tests the body measurements that you enter by constructing sloper garments. Basing patterns on a tested sloper guarantees a good fit.